One very common service request or change request approval requirement is to ask for a percentage or majority-based approval. This is something that ServiceNow workflow can do, but it requires a bit of scripting. In the following article, I’ll show you how you can set up some simple scripts in your graphical workflow ‘Approval’ activities to handle these scenarios for any percentage you choose. 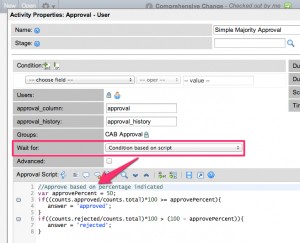 The following example scripts are designed to be placed directly in the ‘Approval Script’ field on a workflow ‘Approval’ activity as shown in the screenshot above. The ‘Approval Script’ field is only visible if you select ‘Condition based on script’ from the ‘Wait for’ field. Once you paste the script in, just adjust the ‘approvePercent’ variable for the specific approval percentage needed.

This first example assumes you’ve got a group of users grouped into a single workflow activity. These users could all be members of a single group. In fact, this is how I typically do majority approvals for the Change Advisory Board. Regardless of whether the users come from a group or are added individually, they are all combined together when evaluating counts in an ‘Approval – User’ activity.

It is also possible (albeit a bit more complex) to do percentage-based approvals with an ‘Approval – Group’ activity. The primary difference here is that you can require a certain percentage from multiple groups. In the example given, each individual group must meet the 50% approval threshold before the activity will return ‘Approved’ and tell the workflow to advance. Any single group not meeting the 50% mark will force a rejection for the entire activity. This took me way more time than it should have to figure out :). Hopefully it saves you a bit of time.