Identify which ServiceNow Record Producer was used to create a record

Identify which ServiceNow Record Producer was used to create a record

Record producers are a great piece of ServiceNow functionality that allows for the creation of records in any table via the standard Service Catalog interface. This capability has been around for quite a while and odds are that you’re already using it in your system to allow end-users to create new incidents…among other things. 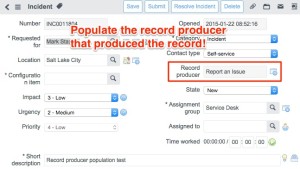 Please note that you will need to manually update every record producer in the system that you want this to work with in order for the producer script to be updated as necessary!

If you’ve done all of the above steps correctly, you should end up with a nicely-populated ‘Record producer’ reference field on each generated record. This value can then be used for reporting or other purposes in your system!