Update: ServiceNow has introduced new ACL functionality that allows you to do basically the same thing as described in this article. They’re also taking a drastically new direction with reporting starting with the Fuji release, but being introduced in the back-end code in the Eureka release. As such, the solution described here is obsolete and no longer supported. Check out this wiki article to see how to restrict report table selection using standard ServiceNow ACLs.

Reporting in Service-now.com is usually very simple. One challenge I’ve seen before with the Service-now reporting interface is that it displays a lot of tables to most users as tables they can report on. The list of reportable tables is controlled by system security ACLs. If a user can read a table in the system they can also report on that table. There are many cases where users need to be able to read from a table in order for the system to work correctly for them, but you may not want users running reports on that table just because they see it as an option in the reporting interface. I’ve created the Restrict Report Tables update set as a solution to this problem. It gives Service-now report administrators granular control over which tables in the system show up as selectable options in the report interface. 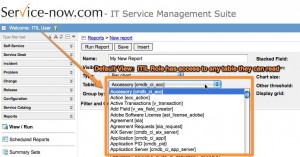 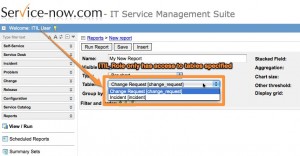 Please note that this functionality has no bearing on overall table security in your system. Users can still run filters, create bar and list charts, and otherwise run ad-hoc list reporting on any table in the system that they have read access to. If a user does not have read access to a table (as defined by your security ACLs) the functionality described here honors that security.

This customization includes the following features:

The second component is the ‘RemoveReportOptions’ UI script which handles the showing and hiding of report form elements. It also controls the override roles (‘admin’ and ‘report_admin’ by default) for the entire behavior.

Finally, the ‘GetReportTables’ Script Include handles the back-end query and selection of reportable tables based on the user role.

This customization is only offered as an update set through ServiceNowGuru.com. You’ll need to install an update set into your instance to get this functionality. Installation and download instructions can be found below.

There are really only two configuration options that you’ll need to worry about. The first is the ‘Report Tables’ definition as shown in the screenshot below. Simply define the tables (and associated roles) that the tables should be available to. The second is the override roles contained in the ‘RemoveReportOptions’ UI script. By default, the ‘admin’ and ‘report_admin’ roles are not impacted by this behavior. You can modify that by changing or adding to the lines at the top of that script. UI Scripts are found under the ‘System UI’ application.