Readonly Variables on a Standard Form

Readonly Variables on a Standard Form

As of the ServiceNow Calgary release, this functionality is no longer necessary and, in fact, can cause some issues due to an unresolved bug in ServiceNow code. The best-practice method for making variables read only on standard forms post-Calgary is to use catalog UI policies and catalog client scripts along with the ‘Applies to’ checkboxes available on those forms. You can also make catalog variables read only all of the time for specific roles by using the ‘Write roles’ field on a catalog item form.

while ago I helped to answer a forum posting for someone who was looking for a way to present catalog variables to an end-user on a Request Item form but restrict the editing of those variables. At the time, I came up with a solution that worked, but that I really wasn’t happy with. I recently came across another forum posting where the poster wanted to do something similar. The difference for the most recent poster was that the variables were to be shown on an Incident form (which had been generated by a record producer). There were some subtle differences in the way variables were presented on the different forms that made my original script unusable for the incident form. So, I’ve had to revisit this topic to come up with a better solution and I’ve decided to compile all of the different options for making variables read only on a regular form. These solutions can be used in a variety of places, but will most often be applied to the Catalog Item, Catalog Task, Incident, or Change Request tables. Enjoy! 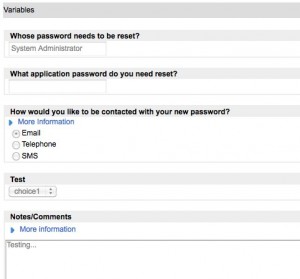 Check out this post if you’re interested in hiding empty variables in a variable editor on a standard form!

Locking down variables by role without a script…

Its probably best to avoid writing any script at all if you can to lock down access to variables. Service-now allows you to add roles to any variable in the system for this purpose. If you want to lock down variables without using a script, the solution can be found here. This solution is very simple but often doesn’t give you the type of flexibility that you need to restrict access to variables. It also requires you to set access to each and every variable in the system individually.

Locking down variables via business rules…

Probably the simplest way of locking down variables on a standard form via script is to create a business rule that checks to see if the variables have changed and then to abort the submission of the task record if they have changed. To do this, you just have to create a ‘before’ business rule on the table you want to restrict the editing of variables. The business rule should have a condition of ‘current.variable_pool.changes()’. You can put whatever you want in the script field but it should include ‘current.setAbortAction(“true”);’. If the user changes variable values and tries to submit the record they would get an alert telling them that they are not allowed to change variables. Here’s a sample…

Abort on Variable Change Business rule
Name: Abort on Variable Change
Table: Requested Item (or whatever table you want to restrict changes to)
When: Before
Update: True
Condition: current.variable_pool.changes()
Script:
//Add an information message, abort the submission, and reload the page
gs.addInfoMessage('You are not allowed to change variable values on this record.');
current.setAbortAction(true);
action.setRedirectURL(current);

Locking down variables via client scripting…

Service-now actually provides a simple way to make a variable on a standard task form read only via client scripting. If you just need to disable one or two variables on a single item then this is probably the best scripting option. The solution is documented here.