ervice-now.com provides a really cool Graphical Workflow engine to help manage workflows for different tasks. This graphical workflow engine is particularly useful when working with approvals for Change Requests. As a ServiceNow consultant I’ve found that change approvals usually fall into just a few different types but new administrators and consultants sometimes don’t know the best way to implement approvals. In this post I’ll share some of the common change workflow approval methods and scripts I’ve seen used before. I wouldn’t be surprised to see this list grow over time and I know I haven’t seen all of the common methods. If you have something you’ve used before please comment on this post or use the ‘Contact’ link above to send in your suggestion to share.

The simplest (and most common) type of approval is to select specific groups or users to approve the change. The screenshot below shows how you can use the standard reference field lookup to select a group to add as approvers to the change request. This method is commonly used when you want to have a specific group (like the CAB) approve at some point in your workflow. 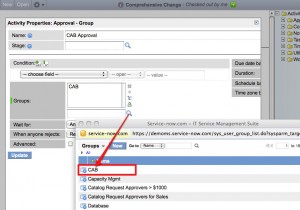 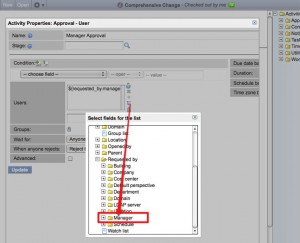 The ServiceNow Graphical Workflow mechanism also allows you be even more complex in the selection of approvals for your change requests. You can use script with GlideRecord queries to return any users or groups you want to have approve. The one thing to keep in mind with these scripts is that you need to return group records if your workflow activity is a Group Approval type and user records if your workflow activity is a User Approval type.
One common request I’ve seen before that requires a script is to add approval groups based on the Configuration Items associated to the change request. Chances are you’ll have multiple CIs associated on the ‘Affected CIs’ related list for the change. This script queries for those records and then adds the groups from the ‘Approval Group’ field on each CI. 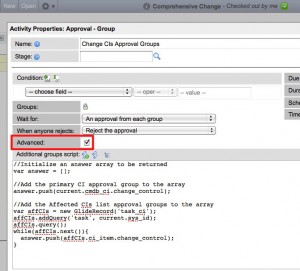 //Initialize an answer array to be returned
var answer = [];

//Add the primary CI approval group to the array
answer.push(current.cmdb_ci.change_control);

There are some rare cases where clients want to pull approval groups from other CIs that will be impacted by the change based on CI relationships. For these cases you can use the CIUtils2 script I created to walk the CI relationship tree and find the impacted CIs that you need to add approvals for. In order to use these scripts you’ll need to add the CIUtils2 script include to your system first. You’ll also want to use this type of approval method sparingly since it involves a sometimes resource-intensive traversal of your CMDB (if you have hundreds of thousands of CIs). It’s also pretty expensive process-wise as well. Do you really want to require approval from every single group in your company when your network team needs to make a change to the core router? Maybe so, maybe not, but either way you’re probably talking about a lot of approvals because that CI impacts so many other CIs in your environment.

Impacted CIs approval scripts
–This first example returns Approval Groups for all of the Business Services impacted by the change request–
//Initialize a variable for the CIUtils2 Script include
var ciu = new CIUtils2();
//Initialize an answer array to be returned
var answer = [];

//Add the primary CI to the CI array
allCIs.push(current.cmdb_ci);

//For each directly affected CI on the change, add any impacted business services
for (var i = 0; i < allCIs.length; i++) {
allCIs = allCIs.concat(ciu.cisAffectedByCI(allCIs[i]));
}

function checkDuplicates(a) {
//Check all values in the incoming array and eliminate any duplicates
var r = []; //Create a new array to be returned with unique values
//Iterate through all values in the array passed to this function
o:for(var i = 0, n = a.length; i < n; i++){
//Iterate through any values in the array to be returned
for(var x = 0, y = r.length; x < y; x++){
//Compare the current value in the return array with the current value in the incoming array
if(r[x]==a[i]){
//If they match, then the incoming array value is a duplicate and should be skipped
continue o;
}
}
//If the value hasn't already been added to the return array (not a duplicate) then add it
r[r.length] = a[i];
}
//Return the reconstructed array of unique values
return r;
}

One of the big problems you may encounter is what happens if the approvers don’t exist or aren’t active. The behavior in ServiceNow is to mark the approval activity as ‘Approved’ if no approvers are returned by the activity.

Some approval scenarios may also require that a specific individual has the full approval/rejection responsibility even as a member of a group. Even though others can approve or reject, a single person has the final say. Once they approve or reject, we move on from the activity. The following script can be used in an ‘Approval – User’ workflow activity to facilitate this type of setup. 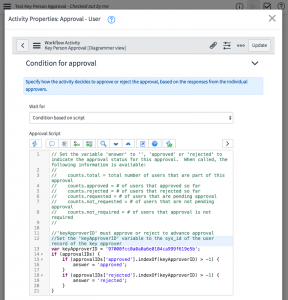