while ago, I was trying to figure out how I could add some javascript animations and effects to a ServiceNow instance. What I really wanted was something like the jQuery Effects API but I didn’t want to have to incorporate a separate API and deal with the loading the bulk of jQuery everywhere in the instance. I knew that ServiceNow provided some limited collapse/expand effects but I was hoping for a little bit more.

I’m happy to report that I found it! Somebody smarter than me decided to convert the jQuery effects library for use with Prototype (which ships with ServiceNow) and incorporate those effects and animations directly in ServiceNow. 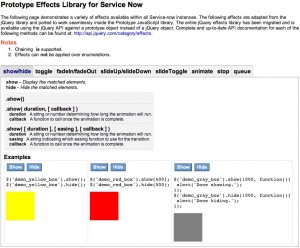 This effects collection includes the ability to animate, slide, toggle, and fade most dom elements and works just like the jQuery library. Best of all, it’s all laid out in a simple UI page directly in your ServiceNow instance! You can view this by navigating to the following URL…

So far, I’ve found this to be useful in some custom UI pages and a collapsible CMS menu I built. I’m planning on posting the collapsible menu solution sometime soon. Post a comment here if you come up with a cool solution using some of these effects!