I‘ve seen a couple of requests recently for a capability to record actual, hand-drawn user signatures. There are probably several uses for this type of thing, but usually the requirement has something to do with a field service technician completing work in the field, and then being able to get a customer to sign indicating that some work was performed. This functionality doesn’t exist in ServiceNow, but it can be added thanks to a very cool jQuery plugin called ‘Signature Pad‘. I’ve incorporated this jQuery solution into a UI page/Dialog-based solution for use with regular ServiceNow records and forms. Read on for more information about the SNCGuru SignaturePad update set! 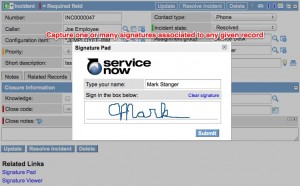 Internet explorer doesn’t include the necessary canvas support to record signatures natively. Fortunately, there’s a flash-based solution that integrates nicely with this one. Because of this, the setup instructions include the standard update set procedure (linked to below). After the update set is installed however, you’ll also need to do the following…

2Use the paperclip icon to upload the ‘flashcanvas.swf’ file (included in the download).

3Get the sys_id for the uploaded attachment by right-clicking the attachment and copying the URL. The sys_id should be at the end of the URL.

4Modify the UI Script by adding the attachment sys_id as shown in the image below. 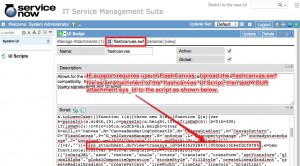 This SNCGuru solution is packaged as an update set for easy installation in your instance. Included in the update set are the following elements…

Using the Signature Pad is simple. Just open any incident record and click the ‘Signature Pad’ link. Fill in a user name (and optionally description text) in the name field, and then sign using any standard input mechanism as shown here.

You can also view all recorded signatures by clicking on the ‘Signature Viewer’ link. 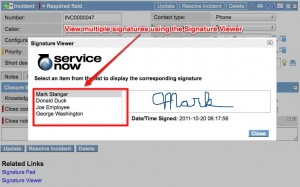 You can view the update set and installation instructions here…